You have been my good friend for eleven years. Time flies, doesn’t it? You are turning forty today. Happy Birthday!

Do you realize how much you have achieved? You have money. You have no debt. You have a big house, and you have a good and stable job. You can afford to go to exotic countries for your vacations. You are raising two kids all by yourself, and you are doing a great job.

I am very proud of you because not every woman could have achieved what you had. Remember last year you bought a new car and paid cash? It was such a huge achievement, didn’t you think so? At least in my eyes! A single mother of two pays cash for everything! I, on the other hand, can only dream about it.

We have been good friends for years, but somehow it feels that we live on two different planets. Sometimes I feel like you don’t know me at all. Especially when it comes to your birthdays.

I am always dreading your birthdays because I know that I am expected to keep up with your expectations. You don’t take into account that Beaker and I have debt to battle. You don’t ask me if I can actually afford to celebrate your birthdays the style you want. For years I have tried really hard. I have even put quite a few your birthday expenses on a credit card just to prove to you that I was a good friend.

This year I am refusing to overspend in order to be a good friend. The point is that the friendship should matter, not the amount of money I spend on your birthdays. Right? RIGHT?

You are turning forty, and you want a big expensive celebration with close friends. You want great celebrations every year.  I won’t mention the past. This year I totally understand it. We turn forty once in a lifetime, and some of us want to make it a special occasion, something to remember forever.

If you want your close friends around during your special day, don’t you want to consider your friends’ financial situation? Just for a short second? Just once in eleven years?

You suggested an upscale five star restaurant where entrees are served a la carte and cost about $50 and up.

Have you ever listened to me telling you that there are bills, there is debt in my life? Have you ever understood that Beaker and I don’t have a good emergency fund, and we live on a borrowed time before something happens?

Don’t make me regret telling you that we paid $13,000 off of our debt last year, because it seems to me that you want me to put your birthday bill on my credit card.

Now… I realize I have gained some weight over the years. But it doesn’t give you the right to tell me that Beaker and I should eat less when I tell you that we cannot afford to go to your birthday where we have to pay $50 per plate. Of course we can come and order a couple of salads (hopefully they will give us some bread), bring a bottle of wine, and watch you enjoy your day. Would you like us to do this?

I am trying to understand what matters to you the most: spending time with your close friends celebrating your special day OR have an upscale dinner just because you can? If it is the latter, you are on your own this time.

Hopefully the day will come when you read this letter. Maybe you will get mad that I put it on my blog. Maybe it will ruin our friendship. I do hope, however, that this letter will make you think a little bit more about me and a little bit less about yourself.

I love you, and I always will be your friend!

Welcome to Talk It Out. It finally arrived!

One of my readers wrote me a while ago, as soon as I introduced the Talk It Out column. I followed up with her to see if the situation she found herself in remained unchanged. Unfortunately for my reader nothing has changed. Fortunately for me, I can feature her in my first Talk It Out.

She chose to remain anonymous, so I had to change her name. I did put some of my remarks in italics. I just couldn’t help but say something before I even got a chance to discuss it!

Background: Lisa has been living with a guy, I’ll call him Bob, for the last 3 years. He is in his early thirties. She is in her late twenties. Lisa thinks that Bob is “a good man, caring, loving, fun.” But Bob is really bad with money. In spite of this flaw, Lisa was considering to marry him until… well… until this tax season.

How Bob manages money: he doesn’t own a credit card because in the past, according to Bob, he had a really bad experience with a student loan that screwed up his credit score. Bob has no savings and lives paycheck to paycheck but somehow always finds money to buy video games.

He refuses to come up with a budget. He doesn’t allow Lisa to pull his credit report and “barks” at her if she brings it up. He has an outstanding dentist bill that he doesn’t pay because, according to Bob, his dentist screwed it up (Really Bob? Your life seems so “unfair.” It is never your fault, isn‘t it?) Finally, he owes $2,000 in back taxes.

Lisa and Bob keep their money in separate accounts (Thank God! I am a joint account proponent but in this situation who would think differently? Anyone?)

Situation: Lisa has done her taxes and found out that she is getting $2,000 back. Then she proceeded to do Bob’s taxes, and it appeared that Bob owes $500 (ouch). She researched what could have possibly caused it, and found out that Bob never changed his federal and state exemptions from 3 to 0. She asked him to do it last year when he also ended up owing taxes. He never did!

Bob doesn’t have money to pay the taxes he owes.

Lisa got sick and tired (finally!) of Bob’s unwillingness to change his attitude towards finances, and told Bob that if he doesn’t change by the end of this year, she will leave him. Meanwhile she is wondering if she was too tough on him, and if she should pay his outstanding back taxes from her tax refund and savings. 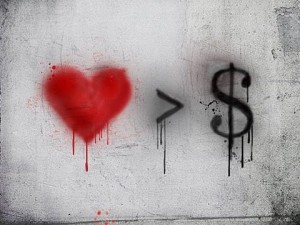 Aloysa’s Talking It Out: Let me make it clear:

– the guy refuses to make a budget,

– he doesn’t let you to pull his credit report,

– he has no savings,

– he refuses to change

– you are going to stay with him till the end of the year?

What is wrong with you, Lisa? Love can be blind but to what extend?

Don’t pay his bills, please don’t. His bills are his responsibilities (and he doesn’t like to take upon any of them.) By paying his bills you are not helping him to achieve anything or start from a clean page. You are helping him to pay for more video games!

You have been living together for three years, and he has not change anything for you. What makes you believe that he will change within the next ten months? He is in early thirties (seriously, he is not 12 and clueless) and, let me tell you, people usually know pretty well what they want by this age.

I don’t think Bob loves and respects you, Lisa. I am really sorry to say that but he doesn’t plan your future together. It sounds awful, I know. I believe that when you love your partner, you will sit down and find a comprise that works for both of you.

By the way, if you know his social security number, and you should know it if from doing his taxes, pull his free credit report and, I can bet, you will see there things that you have not imagined.

But enough of my opinions already. AKS readers always have a lot of  insightful opinions, magnificent advice and a lot of support to offer.

Let’s talk it out with my readers!